Durga Puja or Durgotsov is the biggest festival of Eastern India and, is widely celebrated in West Bengal, Bihar, Jharkhand, Odisha, Tripura and Assam. The festival is initiated with the official invocation of Maa Durga on the auspicious day of Mahalaya (the beginning of Devi Paksha), when, it is believed, she starts her journey to earth. The Durga Puja lasts for five days, Sasthi, Saptami, Ashtami, Navami and Dashami. On the last day, the idol of the Devi Durga is immersed in water. The act of immersion of the goddess is called ‘Bisarjana’.

The city of Kolkata goes through a makeover for the Durga Puja. Decoration at every nook and corner, eye-catching light shows, beautiful pandals (makeshift home for Goddess Durga) – all these together make the festival the largest on-site art exhibition of the world. 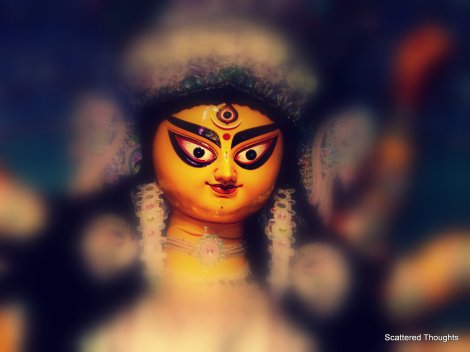 The Third Eye of Goddes Durga. Symbolic of her power to see through our minds and she looks over the whole world as well.

Goddess Durga is the incarnation of eternal femininity. She is believed to be the supreme power of Creation, Preservation and Destruction. She fights against the demon, Mahisashura, to save the world from all the Satanic force. The demonic forces receive their comeuppance at the end and, the festival thus celebrates the triumph of good over evil. Devi Durga is also called Durgatinashini meaning ” destroyer of all evils”. 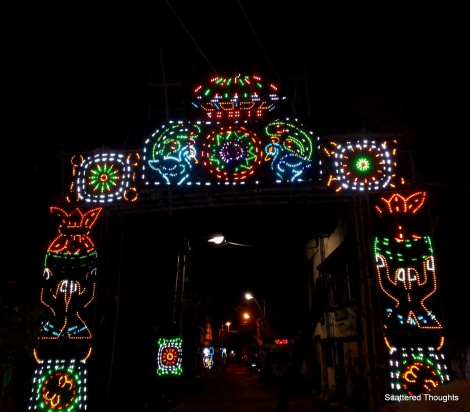 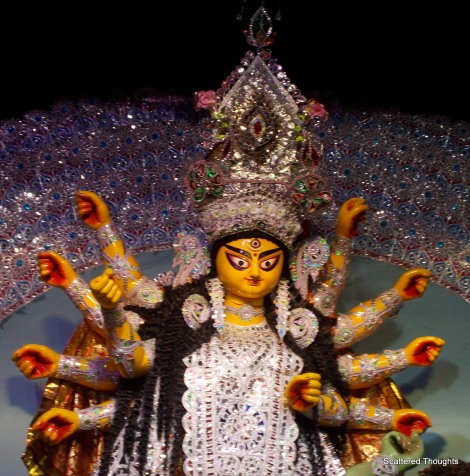 According to Hindu mythology, when Devi Durga decided to fight against the merciless demon, Mahisasura, all the other Gods helped her with their weapons. Thus the idol has ten hands holding lethal weapons for her enemies and also blessings for her devotees. It is also said that her ten hands actually signify, that, she is protecting the earth from every direction (according to the Hindu Shastras there are 10 directions, East, West, North, South, North-East, South-East, North-West, South-West, Zenith, and Nadir). 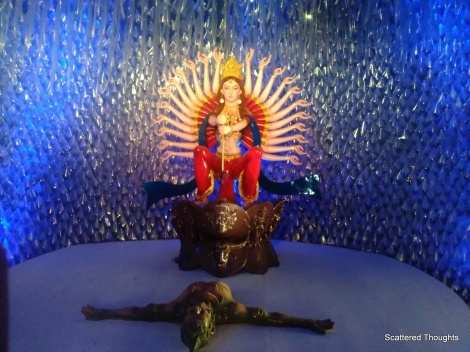 During the past few days, I had been extremely busy as I was visiting different idols of Devi Durga (we call it pandal-hopping) with my family and friends. It’s a time of reunion for every Bengali. The city of Kolkata never sleeps for these five days. You’ll get all kinds of food, be it authentic Bengali, Indian, Continental, Thai, Japanese, or Chinese, anywhere and everywhere. A gourmet’s delight in the truest sense! We indulge ourselves in a gastronomical divertissement for the puja days.

So, my dear readers and friends, pardon me for not replying to your wonderful comments on my posts and for being unable to go through your posts as well. I’ll try to be regular in a couple of days as the festival marks its end.

In the meantime, enjoy the Durga Puja pictures. May Goddess Durga’s blessings be showered on you. May the world be free of demonic souls. #HappyPuja

You can get some glimpses of the Durga Puja for the previous years here, here and here.

82 responses to “Durga Puja in Kolkata, 2016, Thoughts and Pictures” 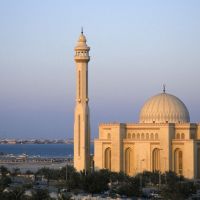