Tara waited and waited. Her friend didn’t turn up even after half an hour past the scheduled time. Her heartbeat was increasing with every passing moment. After all, it was Roohi, her daughter, whose fate was dangling in between all these events. She carelessly looked at the walls of the Leopold Cafe which still held those cicatrices which reminded her of  the terrorist attack of 26/11! She shivered uncontrollably and prayed to God about the safety of her little angel. For the umpteenth time she took out her mobile to dial a particular number only to get the same mechanical voice,”the number you’re trying to call is currently switched off.” A plethora of emotions was playing in her mind; of anger, frustration, hatred and above all, anxiety! For her daughter.

The aroma of exclusive food and the vinous smell initiated her appetite and she wondered how in spite of all odds playing in one’s life, one couldn’t help but to succumb to the basic necessities of life…..gastronomical satisfaction being the most effective of them all! With a sigh, she decided to order a chicken omelette and a Diet Coke. She just placed her orders when her mobile phone rang. Her anticipation receded as she looked down at the number…..it was her dad again, Mr. Gupta. Tara could well understand that the showdown time was approaching, slowly but surely. Words of her dad said long ago echoed in her ears,“No matter how far you have gone on a wrong road, turn back.”  With her fingers trembling, she pressed the ‘accept’ button.

Cyrus arranged to book a second class ticket with a train which is especially noted to have a penchant for being late and was rather avoided by high-class people, the Mangala-Lakshwadeep 12617 Express. With a methodical madness, he made his boarding from Kalyan. Meanwhile, he switched off his mobile phone, took out the SIM and rented a room in an inconspicuous hotel. After checking in, he lazily began to read the e-book he had downloaded for free a few hours ago. He was feeling a tad bit relaxed. His former alley would not be able to trace him easily and in the meantime he would reach Delhi and then he must start working to wipe out his digital footprints which could lead him to danger. With a smug smile he sipped the coffee and concentrated on the book.

“I really doubt your sanity Mr. Dutta! I can understand your feelings for your daughter. But please! You can rant and rave all you want, still, the truth is far from what you’re saying ….just recall the situation when we first met. If I had to be one of the persons who are conniving to kidnap your child, why on earth I should have disclosed everything to you? In that case, I would’ve told you that it was just an accident. I didn’t either need to point out the relation between that blogger and Mr. Ahuja…who coincidentally is your neighbour. Obviously I’m anxious for my own safety but I’ve genuine concern for Roohi also, she is such a lovely and intelligent child!…..just think rationally Mr.Dutta …..that would be helpful for both of us”.

She was almost out of breath as she finished her overwhelming outpour. Moreover, all the day’s excitement along with the medication which was applied to her at the hospital were showing their effects now. Jennifer was knackered. She couldn’t take it any more. In a feeble voice, she said again, “Trust me Mr.Dutta, please call your wife and we can discuss the situation together, in the meantime, can we wait for her at your  apartment? I’m not feeling well”.

Shekhar, as if in a trance, pressed the desired button and the elevator got life.

Roohi was sleeping. Suddenly a white, monstrous face made it’s way towards her. It was a familiar face and Roohi hated it. As it came nearer she screamed and an amazed Krishna appeared by her bed.

“What happened Beta? Got frightened? Was it a bad dream?”

“I want to go home Krishna”, a sobbing Roohi answered.

But he actually had no idea how and when will that happen. Will Roohi ever be able to go back to her normal life? With both of her parents by her side to complete the picture?

“Me and my team are participating in ‘ Game of Blogs‘ at BlogAdda.com. #CelebrateBlogging with us.”

Hey, I know you’re curious about the next part !! read it HERE

4 responses to “The ‘Web’ Thins and Thickens” 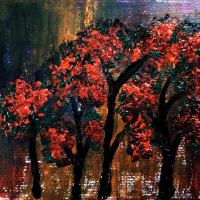